According to the Federal Highway Administration (FHWA), direct and indirect costs of traffic detours resulting from bridge rehabilitation and/or replacement can potentially exceed the total cost of the bridge construction itself.

With one-quarter of the nation’s bridges deemed structurally deficient – requiring repair or total replacement, many municipalities are wrestling with multi-million dollar decisions of how to plan, pay for, implement and complete bridge upgrades, all the while limiting the impact to their communities. Today, more and more stakeholders are opting for Accelerated Bridge Construction or (ABC) technology and the reasons for doing so are not what you think.

First, for those who may be unaware of this technology, ABC is an acronym for Accelerated Bridge Construction, described by the Federal Highway Administration (FHWA) as a ‘paradigm shift in the project planning and procurement approach where the need to minimize mobility impacts which occur due to onsite construction activities are elevated to a higher priority’. To explain all the aspects of this burgeoning construction technique in a monthly newsletter feature would require the time-span of K-12 education, and enough documentation to keep you reading until retirement.

For the sake of time, let’s assume your knowledge of ABC is adequate, as you are a precast producer, and an industry professional; but just in case there is a reader who desires more details about this construction technology, a plethora of useful links are provided below. The goal of this feature is to highlight what may be the most important aspect of ABC…

COUNTING THE COSTS
It’s understood that ABC methods have an impressive list of benefits such as an expedited completion deadline, (hours, days, weeks – not months), improved worker safety, better quality control with offsite manufacturing, frequent on-site inspections, and limited delays due to weather conditions. But the flip side is these benefits come with a 20-30% higher construction cost than conventional construction methods. Plus, the construction industry hasn’t fully embraced the technique, mainly because there haven’t been enough projects for contractors to gain expertise, (though this is slowly changing). The FHWA has implemented programs like EDC (Every Day Counts), where they work with a state’s DOT to champion innovations like ABC, and help identify potential projects. Also, individual states like New York’s BRIDGE NY initiative, have implemented infrastructure funding programs to stimulate further growth.

Growth takes time. Even with federal and state assistance, construction costs probably won’t lower until ABC methods become standardized and crews are fully trained. So, with higher associated costs, why would a stakeholder choose ABC over conventional construction? Would it be quality? Worker safety? Funding? Faster? Yes, to ALL of these, but one of the main considerations in decision-making, (even above construction costs) is the cost to the User.

WHAT ARE USER COSTS
Estimating construction costs is a quantitative process of forecasting the cost of building and/or renovating a physical structure from design to completion. This means there are defined measurements, specific data, metrics, as well as the availability of software and spreadsheets to assist when a client asks, ‘how much’?

User costs are now being considered as part of the total construction cost; they are qualitative in nature, not easily defined or measured, and based on attributes, identifiers, and hypothesis such as:

HOW ARE USER COSTS DETERMINED?
This is not easy to answer. In fact, for now, user costs can’t be definitively calculated, but guidelines and tools are coming. The FHWA is developing a “rule of thumb” guideline for calculating ABC costs for various projects entitled “Work Zone Road User Costs”. This will be available in the near future on the FHWA ABC website.

Besides the FHWA, another resource is Florida International University. The Civil and Environmental Engineering department compiled a report in 2016 called, ‘Estimating the Total Cost of Accelerated Bridge Construction (ABC). In the report, they acknowledge a pressing need to provide decision-makers with a comprehensive tool for estimating the total cost of ABC projects including, construction, indirect, agency cost, and user costs. They go on to say, this tool will facilitate comparing the total cost of bridge repair and replacement work under both ABC and conventional methods. 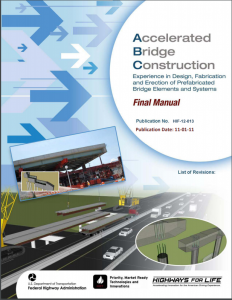 ABC DESIGN – WHAT DIFFERENTIATES DELTA FROM COMPETITORS?
Simple, it’s Delta Precast and the bridge engineering experts in our transportation group.

One of the most utilized ABC technologies is PBES or Prefabricated Bridge Elements and Systems, which includes precast concrete. Delta Precast has over 25 years in structural design and detailing services. Throughout these years, we have gained a reputation in the precast industry as being accurate, fast and responsive.

CONCLUSION
Learning the ABCs of an evolving bridge construction technology will be very similar to learning the ABCs in English. It’s a process that will not happen overnight. There are many complexities for engineers and producers alike to navigate. The back and forth dance to be played out by federal, state DOTs and local municipalities as to what bridge construction method to choose will eventually become static. The only decisions to make will be the ones that really matter…how to best provide safe, low-cost infrastructure solutions to improve the quality of life for those we impact.